A downloadable game for Windows, macOS, and Linux

Now on Steam, PS4, Xbox One, and Switch!

Streets of Rogue is a rogue-lite about player choice, freedom, and anarchic fun. The game takes inspiration from fast-paced top-down rogue-lites like Binding of Isaac and Nuclear Throne, and adds free-form, experimentation-driven, emergent gameplay elements of RPGs like Deus Ex.

Rather than taking place in a dungeon, the game is set in a functioning, procedurally generated city, where complex AI informs denizens from all walks of life, who are just trying to get by in their daily activities.

In order to progress, the player will need to accomplish specific mission goals in any way they see fit through use of their special character traits, items, and the environment.

This itch.io version acts as an extended demo.  Same gameplay as the full version, but with less content and fewer game modes.

the linux version is not working here

i tried running it from terminal to debut what the issue was, and got this error:

i tried to run it from steam, or copying those files for the same location that the main executable is, but nothing changed.

Had the same problem until I started the game in windowed mode first. Run the game with ./StreetsOfRogueLinux.x86_64 -screen-fullscreen 0 and then change the settings back to fullscreen.

Reply
Abele BC gamer244 days ago

I really enjoy the game. When will be the full scope game available?

The game has been released on Steam, although I believe they also have a website somewhere where you can buy it directly from them.

This game has so much scope, so much range, so much randomness! Just playing the demo version is an exercise is being overwhelmed (in a good way)!

The premise is simple. Pick a character (all with different stats and different mission types throughout the game), customise that character to look as much like you as possible (or not, it's up to you!), then dump that character into a veritable warzone of gangsters, hackers, mad scientists, angry bums, gorillas and who knows what else and see what happens!

It's insanely entertaining, and there's so many different things to see and do and interact with and beat up that you'll be occupied for months... nay, years! So if you want an old school style beat-em-up with an open world landscape then give this demo a trial run. And if that whets your appetite go and grab the full version as soon as humanly possible!

Madguy / Matt, you sir are a veritable genius and I look forward to seeing more madcap work in the future =)

This game is so awesome I understand for updates to take long since your the dev yourself, but what about a level editor! And ya know you do you with more of your awesome content for future updates?

I wish I could play this game, it looks good and my friends say it is really good

Why can't you play the game??

you can you just dont know how

why cant we play local coop both players on keyboard

This game is good

Just call it a demo goddamn.

I quite like this game, are you takinging donations?

Or is this a demo?  If it is can I buy the full version on itch?

Can't I just buy it on itch?

I would rather buy it here then steam

I think he would rather give the money to the developer directly, Steam takes a percentage

I'd appreciate if the game dev(s) could specify that this is a demo build and the new(er) version is on Steam.

This one seems like a fun game, I'm guessing that it's some old Alpha version on Itch right?

he updated it from time to time, the current version is from 2018/07

And the full(er) version is purchasable on steam

Such a fun game to play :D

Im glad this is one of those games where they update the demo version because I realized that I was playing on free version 36 so im glad I noticed it im thinking of getting it with cash to great game 20/10 doctor OP :) !

Thanks and keep going you rock !

For a while I saw this game on steam but didn't bat an eye. Recently I realized that this looks like a game I'd like. I looked at reviews and was waiting for a time to get it. Then I heard about this demo and got super excited to try it out. I tried it out and proceeded to LOVE it. This game is really fun. I don't know if this is a thing in the full game, but I think that maybe it'd be a good idea to limit the starting character pool to maybe only the first few characters, then have the player unlock subsequent ones. This would give the player something more to work towards and would be less overwhelming when you first open up the game and see that intimidating character list.

that's what it is on steam version: you start with first 5 characters and have to unlock the rest (the same hold true on various trait and quest rewards as well)

I know this is probably tedious by now, but please make this available for purchase here. I don't care about MP and do not use Steam. Why not have another income stream even if it's a smaller one?

Because that's an extra storefront to maintain, and people would be confused/annoyed by the fact that multiplayer didn't work.  Wouldn't be worth the extra hassle.

Reply
Hyperlink Your Heart1 year ago

Wow, this is really fun! I love the variety of characters and how many different ways there are to interact with the world.

do you need a remote to play mutiplayer

how do you play multiplayer on the same keyboard

You can't, sorry.  At least one person needs a gamepad.

Yes, any gamepad that works with a PC.

Sucks that we need to get the steam version.

This game looks awesome, but I must agree. Steam is lame for being a pro-DRM resource hog, which is why I use itch.io and GOG in the first place.  Why not make the full version available here for full price? I would buy immediately.

Reply
Literally A God1 year ago

Steam a resource hog?  It's currently sitting at about 90MB in my task manager.

If Steam is considered DRM, it's about the lightest DRM imaginable.

I spent so many hours on this demo that i can say i love it. But i won't buy it on steam for more than 5 bucks .

Why i would say not more than 5 bucks? Because i think that, if i pay more than 5 bucks, then i should be able to do whatever i want with the game (not sharing as a torrent, of course) but as least lend it to friends. I often share my games with friends who would not have payed for it. And maybe then eventually buy it and never bother to install and play with the version i installed for them (them is 1 or 2 max). In the end, people who never played the game will end up talking about it. (sold enough Firewatch this way)

Street of Rogue is not a game for everybody, that i can agreed on. It's full of references and gameplay that is made for players who know their way about what gaming is. It's not an easy call (like Firewatch where you can play if you're not a gamer). But if we want to show the people what can be done with pixel and imagination (ur game is pretty clever or that point), then we need to be able to show that those games exist and your's is exactly the good example.

But i can't do that with DRM. and lightest DRM is still DRM. It's not about protecting your game (by the way, you could do something for the torrents) it's about the freedom to share/show/play with.

I hope that you'll make enough for a living to reconsider this at some point, or when the game will be older, or for a limited time event (Awesome Games Done Quick — or Summer one — could be a good one to sell the drm free version on itch for instance -- maybe even a little bit pricier to give to the fondation the GDQ will support) .

Meantime, i really wish you the best, because i love the work you put in streets of rogue, and I hope you dont get any word i say wrongly. I just want to explain why I dont like DRM as i understand that you need to make a living.

I look forward reading what good is gonna happen to your game, and i'll be happy to read any good thing that will happen to you too.

Actually, the game doesn't even technically have Steam DRM.  You can copy-paste the files from the Steam directory somewhere else if you want to share it that badly.  The game will still work, aside from multiplayer.

The primary advantage of Steam is that I update the game frequently.  You won't get those updates automatically if you don't use it.  Frankly, I think this trumps most intangible freedoms you might have with a completely Steam-free version.

Thanks for letting me know. If i can play without steam running, then it´s a go, as I really loved what you've been developing.

I removed the torrent link from the previous comment, I just realised how rude it could have been. I apologize for this.

What are the differences between this version and the Steam version?

The full version has 5 areas instead of 2, more characters, 4 player couch coop instead of 2, online multiplayer, a "home base" with unlockables, achievements, and a bunch of other stuff.  This is effectively more of a demo at this point.

Pretty fun, I dig the artwork. Although seems overly complicated with so many character, and might seem overwhelming on first approach. All in all, cool game dawg.

is this only local multiplayer?

This version of the game is.  Steam version has online.

Hey for those people that downloaded this, can you send me MEGAsync Streets of Rogue (this one) download link? I'll appreciate it. :)

Eh Nevermind.. I believe that this is demo version. I seen the website... Aw shuck.

Great game, expecially when played with a friend. 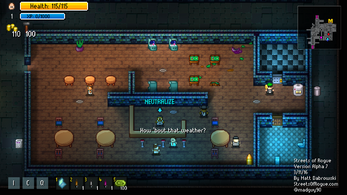 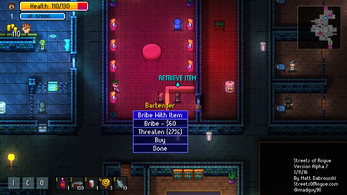 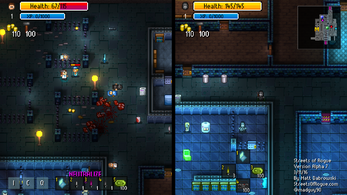 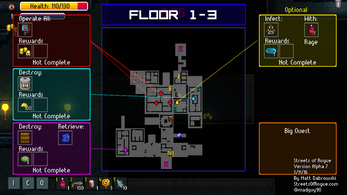